After a long wait, Verizon’s 4G/LTE network is up and running in a few metropolitan locations (luckily mine), and a phone has finally been released that utilizes the faster data network.  The Thunderbolt, manufactured by HTC, was released for sale in March 2011 as Verizon’s first 4G phone.  I had an opportunity to use and review the phone and am delighted to pass on my experiences.

Device Design
The Thunderbolt’s rounded edges make it a pleasure to hold.  The screen is large and the overall build quality is good.  The only two deficiencies I found were 1) a tiny amount of light leaking from two points where the lower part of the screen glass meets the frame of the phone, and 2) the battery door was the toughest to open of any phone I have owned.  This is partially due to some of the antenna being built in to the battery door and I’m guessing a firm connection is required, but it is hard to believe the design calls for the battery cover to necessarily be this difficult to open.  The volume key rocker is nice and large, though this lends itself to accidental pressing when pulling the phone out of a case.  The Thunderbolt inherits the built-in kickstand from the HTC Evo, allowing the phone to be placed on a desk in either portrait or landscape mode at an angle for easy viewing.  I hope to use this feature one day for Skype or Google Talk videophone when either of those features become available. 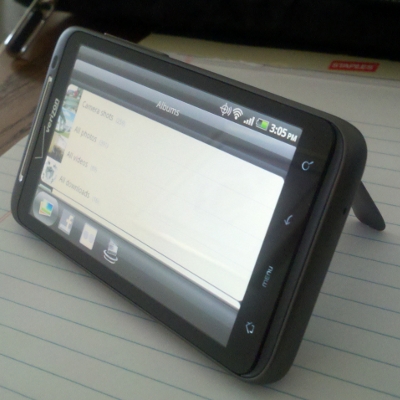 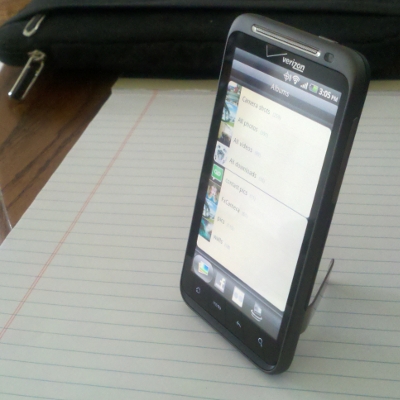 Data
The main selling point of the HTC Thunderbolt is it is the first phone to offer 4G data over Verizon’s LTE network.  I tested 4G on the phone itself and via WiFi hotspot mode, where one can connect a netbook, tablet or laptop wirelessly to the phone and use the 4G data connection.  Where a 4G connection was available, it was very fast.  In almost all cases it tripled my workplace’s wired connection speed and doubled my home cable modem connection.  I ran into occasional issues where the phone shows an available data connection but data is not actually working on the phone, requiring a reboot to correct.  Anticipated phone firmware updates will hopefully resolve that issue.

Battery Life
On the standard battery I get about twelve hours of battery life based on my usage level, which includes mostly WiFi data browsing (as opposed to mobile network data-based usage), up to thirty minutes of phone calls, and frequent checking of email, RSS and Twitter feeds, Facebook updates, and eBook reading.  The battery life I am seeing is not adequate for my use… I like to have a full day of battery life so I can charge overnight.  A disappointing aspect of the charging process is the existence of an old problem harking back to the HTC Incredible, termed the “battery dance” requirement to get a truly full charge.  The issue is the phone’s LED indicator will tell you the battery is fully charged if the phone is on, but if you power down the phone the indicator will turn amber and charge for another twenty or thirty minutes.  In order to get a full charge,  this deficiency forces the user to do without phone service for half an hour, as well as take the time to shut down and later reboot the phone.  The next significant upgrade in battery size (available to date) increases the size of the phone greatly, almost comically.  But if you can get used to the new larger form factor of the phone, the larger battery will get you more than a day’s use.

Pre-loaded Applications
The usual suspects for Android devices are all present on the Thunderbolt… Google Maps, Google Navigation, GMail, the Android Market, and other android-standard utilities and apps.  A few demo applications and games are bundled, as well as HTC-specific widgets and applications.  I wouldn’t mind the “bloatware” if they came with options to fully uninstall them.  An example is a demo of a golf game that only lets you play two rounds.  If you choose not to buy the app, you are forced to see it when scrolling through your phone’s applications.  Some Verizon-specific applications are also included, such as My Verizon Mobile for account access and VCAST Media Manager for downloading video clips and music.

Screen/Display
The Thunderbolt offers a large and colorful display. The screen resolution is not as large as the Motorola Droid X, but I find the Thunderbolt’s display more pleasing to look at and read.

User Interface
HTC phones come with an Android interface overlay called HTC Sense.  Sense provides an alternative to the standard Android layout of phone shortcuts, as well as some nice clock and social networking widgets.  Seven home screens are available for your application icons and widgets.  HTC does a good job with its widgets, and I find theirs more useful than Motorola’s.  The interface is snappy and I rarely encounter lag or stuttering while switching between home screens and loading applications.

Memory
Verizon includes a 32GB memory card in the phone, which will hold many videos, pictures and music files.  I never managed to fill the Droid X’s 16GB card, so 32GB should be adequate for a while.  For internal memory, after all of my regular apps are installed I have over 300MB available after a clean bootup.  This beats the 200MB typically available to me on the Droid X.

Voice Calling Quality
Voice calls were clear on my end.  Reviews from people on the other end of the calls were mixed, with some saying a slight garbling was present in of the connection.  This can happen with any connection and generally the feedback was good.

Camera
The camera app easily allows switching from video to still pictures, for both the front and rear cameras.  The phone does not have a dedicated camera button, which means you will need to burn a home screen icon slot for the camera app if you want quick access to your camera.  The camera app itself supports face recognition and other extras.  The snapshot process is very quick and I am pleased with the quality of the pictures from the 8MP rear camera.  HTC includes some interesting visual effects for picture taking, including depth-of-field options, distortion, and the usual inclusions of grayscale and sepia.

Overall
The Thunderbolt compares well to other smartphones available.  Once data connectivity quirks are corrected through software updates, the Thunderbolt will likely be the phone with the fastest wireless data connection money can buy.  Its rounded edges and high data speeds give it an edge over the Motorola Droid X, making up for the lower screen resolution.

The large screen and high speed make it a compelling alternative to tablets, which are very large and not as portable in “real world” settings as advertised.  When getting an Android device I’d recommend getting as powerful a device as possible so more future versions of Android will work on it, so Thunderbolt is a good candidate.  Devices like Thunderbolt and DroidX are more like mini-tablets and offer the best of a combined larger-than-typical interface experience and phone portability.

The Thunderbolt will be my main phone to use until something with even better specs is released for 4G… the speeds I’m seeing will make me hesitant to look back at those crusty old 3G devices.  The 4G/LTE network is new, so be prepared to experience occasional growing pains.

Bill is a member of the Verizon Wireless Customer Council, an invitational customer focus group sponsored by Verizon Wireless.  He is periodically invited to review devices for comment.

One Response to The HTC Thunderbolt, 4G/LTE Android Smartphone on Verizon Wireless